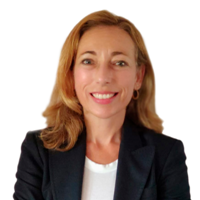 AlgaEnergy is proud to welcome Estefanía Hinarejos Esteve to its agribusiness executive team. She brings nearly 25 years of experience in the chemical and biological industry and a passion for the biological inputs that are a driving force for regenerative agriculture.

Estefanía began her career at the ETSIA (Higher technical school of Agricultural Engineers in the Universidad Politécnica) in Valencia, Spain, where she studied as an Agronomist Engineer. She later went on to study at the Agrotechnological Research Institute in the Netherlands.

In addition, she has participated in research projects and patents related to the Bacillus genus, PGPR’s (Plant Growth Promoting Rhizobacteria), and organic soil regeneration. She has expertise in standardization as President of CTN 142/GT3 “Biostimulants for plants and agricultural microorganisms” and is part of the technical committee CEN/TC 455 “Plant biostimulants and agricultural microorganisms.”

Over the past few years Estefanía has been working with AlgaEnergy as a consultant through the company she founded, Mathex.