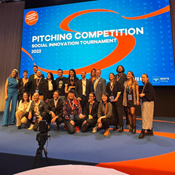 AlgaEnergy, world leader in microalgae biotechnology and its applications, adds one more success to its long list of public recognitions. We have been distinguished with the second prize in the 'Blue and Green Economy' category of the Social Innovation Tournament, an initiative of the European Investment Bank Institute (EIB Institute) to recognize the best European entrepreneurs and promote innovative ideas and initiatives that contribute to generate social, ethical and environmental impact. The final of the Social Innovation Tournament, which included the presentation of applications from the 15 selected companies and the award ceremony, took place on September 29 in Vienna, Austria.

AlgaEnergy was selected -among more than 200 applications from 27 countries- as one of the finalists to participate in this 11th edition, which included the participation of prominent personalities from the academic, economic and political sectors, and opened by the General Secretary of the European Investment Bank (EIB), Marjut Falkstedt.

Our Managing Director, Carlos Rodríguez-Villa, was in charge of representing AlgaEnergy with a presentation in which he highlighted how we want to contribute to responding to one of the great challenges facing our society and, more specifically, the European continent. 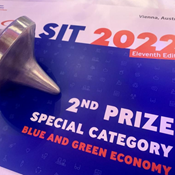 In this way, Rodríguez-Villa presented our agricultural solutions based on microalgae and how, through their use, we help farmers around the world to increase the yield of their crops and the quality of their production, which has a greater value in an increasingly restrictive and complicated socioeconomic and environmental context. The jury, made up of specialists in social innovation from the academic and business worlds, wanted to recognize our contribution with the second prize in the 'Blue and Green Economy' category, endowed with €30,000.

You can watch AlgaEnergy’s presentation here.