17 May, 2017
Both the number of visitors received to its booth as well as the "Award for Sustainability and Organic Production" granted to AlgaEnergy during the Event, confirm the interest aroused by its agricultural biostimulant AgriAlgae® 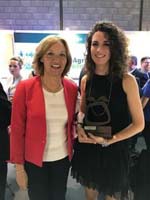 "In terms of number of visitors to our stand, mainly interested professionals and satisfied customers, as well as local and specialized media, we can only rate the result of the Fair as a great success. In addition, one highlight has been the recognition by the organization of the Event granting us the Award for Sustainability and Organic Production", says Carlos Rodríguez-Villa, CEO of AlgaEnergy.

The three days of the Event have been really profitable for the company, and have allowed AlgaEnergy to confirm that its star product, the novel and disruptive agricultural biostimulant AgriAlgae®, continues to consolidate itself as one of the key references in the market, exponentially increasing its number of satisfied users.

"In just two years since its launch, the growth in product sales has been impressive. Among the main reasons of this outstanding performance we can highlight two", says Rodríguez-Villa. "On the one hand, AlgaEnergy is a multi-award-winning and internationally recognized science based company, whose activity generates great interest. On the other, and even more important, AgriAlgae® is obtaining results that exceed in most cases any expectations. Therefore, we are witnessing how the farmer who buys it, repeats with certainty.”

On the last day of the Event, as a culmination of the successful participation of AlgaEnergy in Infoagro Exhibition 2017, the company received the "Award for Sustainability and Organic Production", which has been granted by unanimous decision of the jury through the Minister of Agriculture and Rural Development of Andalusia.

"Amongst all the Awards received by the company at a national and international level, we value in a special way the one received at Infoagro Exhibition, since it is a sectorial Prize that comes to recognize not only the development path of AlgaEnergy, but also the outstanding fruit of 6 years of research, whose result is AgriAlgae®", concludes Carlos Rodríguez-Villa.